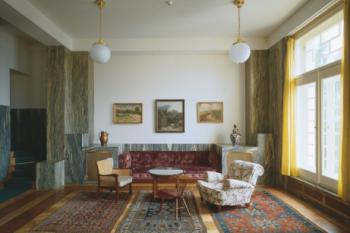 The villa of Milada and František Müller in Prague is one of the great works of modern architecture on a truly global scale. Moreover, it is an example of a rare agreement between an enlightened client and an architect of genius. František Müller was co-owner of the large construction firm Müller & Kapsa, which played a significant role in construction across interwar Czechoslovakia from the very start of its founding. From the many documents preserved in the Construction Archive of the city of Plzeň and the files on individual buildings that concern where Adolf Loos realised his interiors, it appears that after 1890, the company had at least a partial role in the majority of new apartment blocks, industrial structures and roadways in the city. On the basis of these documents, we can assume that the company was likewise the direct owner of all the buildings where Loos later realised his interior commissions.

Also interesting is the information that from 1906 onwards, the firm of Müller & Kapsa worked closely with Richard Hirsch, designing and realising most of the buildings for his wire factory in Cvokařská ulice. Hirsch’s son Vilém (Wilhelm) was a client of Adolf Loos, who in 1906 designed the interior forms and furnishings for the flat for himself and his wife in Plachého ulice, also in Plzeň. In turn, the realisation of Loos’s design was carried out by no other company than, in fact, Müller & Kapsa. Thus we can assume that the first contacts with Adolf Loos that led to the design and realisation of the Villa Müller were in fact made by Engineer Antonín Müller, the father of František Müller, during the realisation of the Hirsch flat in Plzeň.

In 1928, František Müller purchased a plot of land for the construction of his family residence in the Prague suburb of Střešovice: the location close to Prague Castle, supported by the imposing view of the city centre, were inspiration enough for the effort to build here a new, thoroughly modern landmark from Adolf Loos’s design.

The basic form of the villa is a simple cube: its facades are surprising in the austerity of the large uninterrupted areas of smooth walls with unusually tiny windows. This austere façade treatment is typical of Loos’s work: to cite an apercu from one of his own interviews: “I never play around with the façade, that’s not where I live. Take out your chairs, sit in the middle of the street in the rain and look at the façade. If I make a façade toward the street, I try to make the ground floor nice, at most put marble around the floor above it. Above this level I leave it bare, I can’t see that far myself…” This credo was first made material by Loos in 1911 during the construction of the Vienna department store for Goldman & Salatsch, where the façade at parterre level is clad in marble and entirely bare above. As much as in the case of the villa for Dr. Müller, this commercial structure confirms Loos’s conviction that a building should not be built for the passers-by, but for its residents or users.

The realisation of František Müller’s villa also allowed Adolf Loos scope to create the ultimate form of his original concept of space, the Raumplan, based on the dramatic staging of different height levels for various rooms based on their function and symbolic importance, all composed around a central staircase. It makes possible both the mutual visual connection of house-spaces and a game of spatial illusions, as well as the maximum use of the interior space of the residence. Rooms at different levels are linked in turn through several steps.

Loos made his first use of the Raumplan in the staircase vestibule of the Goldman & Salatsch store, and further developed this revolutionary idea in several single-family residences in Vienna, such as the Villa Moller or the Villa Scheu. In the dining room of the Villa Rufer, the intimacy of the dining area is increased relative to the adjoining salon by raising its floor level by several steps. Even more advanced instances of the Raumplan are found in the interior of the house for Tristan Tzara in Paris and the never-realised project in the same city for Josephine Baker. However, the absolute culmination is undoubtedly the Villa Müller, where the interiors form a surprising harmony between the austere functionality of the service areas and the more classicist English style of the representative areas.

In May 2000, the thoroughly restored Villa Müller was opened to the public.

The key element of the exhibition, in addition to the house itself, is the original historic furniture in the villa, including valuable works of art, most of which has survived in its original form. As a result, the house forms a landmark of international importance, commemorating not only Adolf Loos and his assistants, but also the villa’s own builder, Dr. František Müller. Assuring public access to the Villa Müller was unquestionably the most important contribution made by the City of Prague to the cultural program realised as part of Prague — European City of Culture 2000 as well as a continual benefit to the enrichment of worldwide architectural heritage.