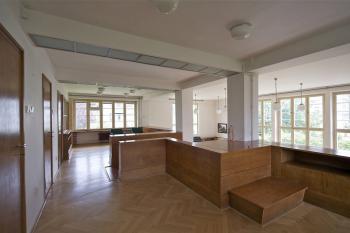 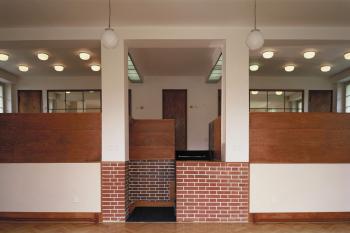 THE FATE OF THE VILLA

The villa was commissioned by the Prague lawyer Dr. Josef Winternitz for his wife Jenny, daughter Suzana and son Peter. The design commission was given in September 1931 to Adolf Loos and Karel Lhota, with the permission for the building’s use granted on 9 September 1932. The Winternitz family inhabited the villa until 1941, when they were forced to transfer it to the Auswanderungsfond für Böhmen und Mähren (Emigration Fund for Bohemia and Moravia), the Nazi institution for administering confiscated Jewish property. The city of Prague purchased the villa from the fund and used it as a nursery school – a function that persisted up until 1997. In 1943, the entire Winternitz family was deported to Theresianstadt, and then to Auschwitz. Immediately upon arrival, Dr. Josef Winternitz and his son Peter were murdered in the gas chamber; his wife Jenny and daughter Suzana were assigned to factory work, where thanks to the heat from the machinery they survived the winters up until the end of the war. After liberation, they returned to Prague, but could never return to their villa. While the Czechoslovak state did recognise their right to its return and renewed the ownership rights of Dr. Josef Winternitz, they nonetheless imposed on it an inheritance tax, and then a luxury tax. The return of the villa was conditional on the fulfilment of these payments and burdened with a heavy liability. Jenny and Suzana, though, had no other income nor any other property: their only recourse was to offer to give the villa back to the state in exchange for cancellation of the payments and other liabilities that arose in their struggle for its return. Never again did they view the villa – or even speak of it in their families. The surviving relatives only learned of the family’s claim on the house in 1991 during the preparations for restitution of Communist-seized property, by which time neither Jenny nor Suzana were still alive. The family was only able to restore the villa thanks to the exceptional energy and work of Dr. Winternitz’s grandson, Ing. Stanislav Cysař. At present, the villa is open to the public as a gallery.

The Villa Winternitz is the last building by Adolf Loos to be completed within his lifetime. Loos was able to supervise construction as late as the autumn of 1932, even though most of the responsibility was already held by Karel Lhota. At the end of November, Loos left Prague for the last time, and his treatment in the Austrian sanatoriums of Rosenhügel and Karlsburg was soon brought to an end by his death in August of the next year.

Comparisons with the Villa Winternitz are offered primarily by the Moller Villa in Vienna (Wien 18, Stadtfriedgasse 19) from 1927–1928, and in Prague by the villa of Dr. František Müller (reg. no. 642/XVIII, Nad hradním vodojemem 14) from 1928–1930. Another link is through the question of why Dr. Josef Winternitz chose for the design of his villa precisely Adolf Loos and his collaborator Karel Lhota: both clients had significant professional and likely personal connections, since Winternitz acted as the legal counsel for František Müller and his construction firm Kapsa & Müller.

The Villa Winternitz is not marked by the expensive materials of Loos’s other interiors. As a structure, it is relatively low-cost, with the expression of the interiors borne out only through brick, plaster and wood, without the usual luxurious marble. Moreover, it is less complex in its Raumplan than the Villa Müller, which takes advantage of the terrain with its 11-metre height difference; on its flatter site, the Raumplan of the Villa Winternitz is limited to six levels.

Entrance to the house is given Loos’s characteristic unassuming form, inserted into the left side façade and protected by a simple vestibule with an adjoining group of cloakroom, toilet and washroom. From here, access either proceeds into the cellar or into the main space of the house at ground level. In the cellar, Loos and Lhota planned the residence of the caretaker, composed of a room and a kitchen with necessary facilities, a laundry with drying and ironing rooms, the boiler and a storage area for fuel, which at the time was coke. The ground floor contained a common living area, which Loos’s and Lhota’s plans mark as the living room. Its floor area of 11 × 9 m is designed on two levels. The lower and larger one is open towards the garden, connected to the terrace that runs the full length of the house, and allowing access to the garden down the stairs. The upper section includes the dining area, connected by a door to the kitchen, and a smaller living space. Positioned symmetrically to the kitchen in this latter space is the library; however, neither kitchen nor library are part of the common space, being separated by walls. Along the axis of the space, a staircase leads to the upper floor, which formed the purely private area for the individual family members. All three of the bedrooms, along the façade, have access to the large terrace, though family recollections indicate that it was only infrequently used. The ‘guest room’, which the plans indicate as the kitchen, was in fact used for the family’s breakfasts. In the other half of the rear section was a capacious bath and wardrobe. The recessed uppermost floor was for the rooms of the children’s governess and the cook, which shared a toilet and bath. In the family, they often repeated Loos’s assertion that the window-parapets are set particularly high to prevent the servants from being distracted by the view and devoting themselves to their work instead. Nonetheless, it was the highest terrace, with its massive pergola on four pillars (the rightmost of which contained the chimney pipes) that adjoined the rooms of the women servants. Since it provided the best views, as well as the sight of both the rising and setting sun, it was used more often by the Winternitz famiy than the lower terrace.